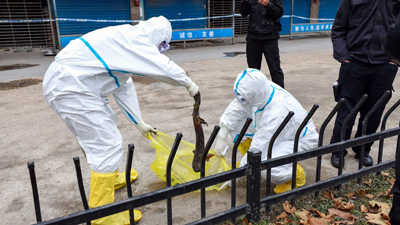 It took China over a week to tell the world it had human-to-human transmission, says a doctor who diagnosed several early cases. -  Chinatopix via AP
By David Gilbert
On January 12, Professor Kwok Yung Yuen diagnosed a family with the coronavirus in Shenzhen, 700 miles from Wuhan. Only some of the family members had been to the city where the COVID-19 outbreak originated, so Yuen knew immediately that he was seeing evidence of human-to-human transmission of the new coronavirus.
He immediately alerted the authorities in Beijing.
But it took eight days for Beijing to warn the world that the coronavirus, which has now killed almost 650,000 people and infected over 16 million, could be spread through human-to-human transmission.
Yuen, who spoke to the BBC show Panorama for an episode due to be broadcast later on Monday, was helping to investigate the outbreak in Wuhan in early January after other whistleblower doctors had attempted to raise the alarm in late December.
Yuen told the BBC he believes local officials covered up the scale of the initial outbreak by destroying physical evidence and delaying the response to clinical findings.  Read more >>
Posted by Anthony Derek Catalano at 9:06 AM