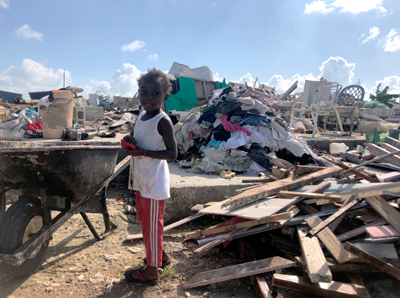 Rihanna Nervillien's five-year-old sister Diamond Delhomme stands amidst rubble in The Farm shantytown. Her family lives in Farm Road. (FILE PHOTO November 11, 2019)
By Royston Jones Jr.
Henfield says govt. is seeking to move rapidly on shantytown issue
NASSAU, BAHAMAS — At least 50 new unregulated structures have been built in The Farm shantytown in Abaco since Hurricane Dorian struck portions of the island last September, according to Minister of Foreign Affairs Darren Henfield.
Henfield, who visited the island two weeks ago, was expected to return to Abaco with Minister of Immigration Elsworth Johnson over the weekend to address the matter.
However, the trip did not proceed.
“The minister of immigration and I had intended to meet with the Haitian community with local government officials, and other government officials in Treasure Cay, Abaco, this past Friday,” he told Eyewitness News.
“That trip did not materialize due to unforeseen circumstances. We just could not make it anymore, and so we are planning to do it as soon as possible, so we can explain to the Haitian community that anybody who has a right to be in The Bahamas is entitled to have a living in The Bahamas, but only in accordance with the laws of The Bahamas.  Read more >>
Posted by Anthony Derek Catalano at 7:22 AM