‘We Need Clarity On Dorian Dead’: Sands Hits Out Over Handling Of Missing Hurricane Victims 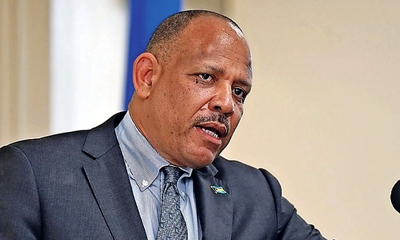 Dr. Duane Sands
By RASHAD ROLLE
Tribune Senior Reporter
rrolle@tribunemedia.net
FORMER Health Minister Dr Duane Sands assailed the Minnis administration’s handling of people who went missing after Hurricane Dorian yesterday, saying the credibility of the government has been hurt by how the matter has been handled.
He said the government has not explained how hundreds of names were culled from lists of people missing following the Category Five storm that ravaged Abaco and Grand Bahama last September.
He also said responsibility for missing and dead persons was spread across multiple government agencies to ensure clarity but that this instead “proved a recipe for disaster.”
He also advocated for coroner’s inquests into the matter to bring closure to families.  Read more >>
Posted by Anthony Derek Catalano at 5:48 AM