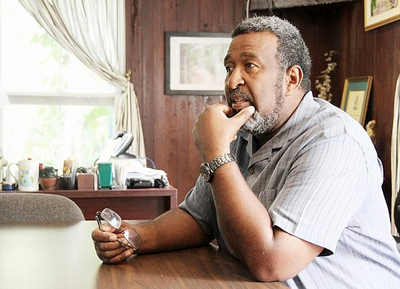 BNT President Eric Carey
By EARYEL BOWLEG
ebowleg@tribunemedia.net
BAHAMAS National Trust is sounding the alarm over concerns about three development proposals for North Andros which have grabbed headlines recently.
For one of those proposals, it has been reported Morgan’s Bluff is the target of a multi-million development. Philanthropic billionaire Dr Patrick Soon-Shiong is heading a group that wants to invest $200m-$250m over the first two phases of the project called the North Andros Green Free Trade Zone. The initial proposal aims to create more than 700 full-time jobs and 10,000 construction jobs.
In a statement, BNT noted the organisation has formally communicated its concerns about the proposed projects to the Bahamas Investment Authority, with copies sent to the Ministry of Environment and Housing, and the Bahamas Environment Science and Technology (BEST) Commission.
BNT said North Andros has six protected areas, adding that five of these areas are included in the mapping of several proposals: Blue Holes National Park, Crab Replenishment Reserve, Joulter Cays National Park, and North and South Marine Parks.
BNT’s executive director, Eric Carey, stated the proposals have the potential to impact the park and their surrounding environments.  Read more >>
Posted by Anthony Derek Catalano at 6:42 AM