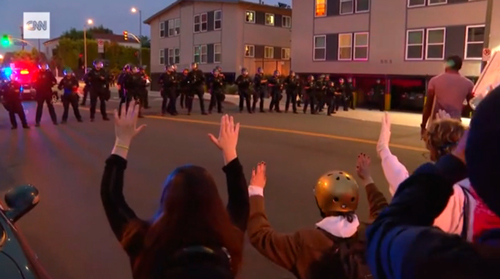 By Paul LeBlanc, CNN
(CNN) - President Donald Trump on Thursday shared a letter on Twitter that referred to the peaceful protesters who were forcibly dispersed from a park near the White House on Monday evening as "terrorists."
The letter from veteran attorney and former Trump lawyer John Dowd appears to be addressed to former Secretary of Defense James Mattis and rebuts Mattis' Wednesday statement castigating Trump's response to the nationwide protests after the death of George Floyd at the hands of a Minneapolis police officer.
"The phony protesters near Lafayette were not peaceful and are not real," Dowd's letter claimed, without citing any evidence. "They are terrorists using idle hate filled students to burn and destroy. They were abusing and disrespecting the police when the police were preparing the area for the 1900 curfew."
CNN has reached out to the White House for comment on the description of the protesters as "terrorists."
The President's decision to share the letter and its shocking description of Americans exercising their constitutional rights comes as he continues to lean into his strongman approach to the ongoing demonstrations. On Monday, he declared himself "your President of law and order" as the peaceful protesters just outside the White House gates were dispersed with gas, flash bangs and rubber bullets, apparently so he could visit a nearby church.  Read more >>
Posted by Anthony Derek Catalano at 4:53 AM