This city disbanded its police department 7 years ago. Here's what happened next. 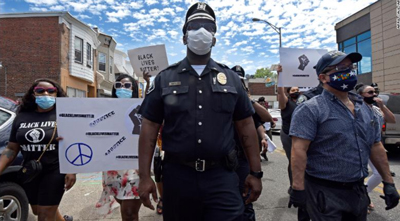 Lt. Zack James of the Camden County Metro Police Department marches along with demonstrators in Camden.
By Scottie Andrew, CNN
Camden dissolved its police department to root out corruption.
The city's crime rate was among the worst in the US. Within nine square miles and among nearly 75,000 residents, there were over 170 open-air drug markets reported in 2013, county officials told CNN. Violent crime abounded. Police corruption was at the core.
Lawsuits filed against the department uncovered that officers routinely planted evidence on suspects, fabricated reports and committed perjury. After the corruption was exposed, courts overturned the convictions of 88 people, the ACLU reported in 2013.
So in 2012, officials voted to completely disband the department -- it was beyond reform.
And in 2013, the Camden County Police Department officially began its tenure. No other city of Camden's size has done anything quite like it.  Read more >>
Posted by Anthony Derek Catalano at 6:25 AM