The Simpsons will no longer cast white actors in non-white roles, Family Guy's Cleveland steps down 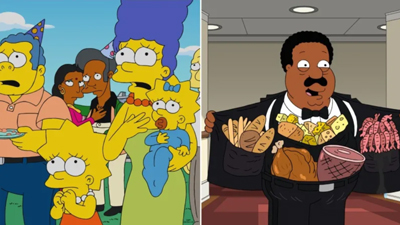 Image: The Simpsons (Fox), Family Guy (Fox)
By William Hughes
The Simpsons and Family Guy are now the two latest shows to address the issue of white actors playing non-white characters in the world of animation, with The Simpsons announcing today, per Variety, that it’ll no longer “have white actors voice non-white characters.” Meanwhile, Mike Henry—who’s voiced the character of Cleveland Brown for the last 21 years on both Family Guy and The Cleveland Show—has announced that he’s stepping down from the part. “I love this character,” he said on Twitter, “but persons of color should play characters of color.”
Henry’s statement lines up with similar comments made earlier this week by both Jenny Slate and Kristen Bell, who announced that they’d no longer be playing Black or biracial characters on Big Mouth or Central Park, respectively. So far, there’s no word yet on whether Family Guy itself will follow Henry’s lead and take a similar pledge to no longer feature any white actors in non-white roles.
Meanwhile, it’s not clear yet what this decision will mean for The Simpsons. Pretty much every Black or otherwise non-white character in the show’s roster of regular Springfield citizens—including Carl, Dr. Hibbert, Lou the policeman, fourth grade student Lewis, Bumblebee Man, Judge Snyder, Akira, and more—has been voiced by a white actor, most frequently Hank Azaria or Harry Shearer. When this issue came up in regards to Azaria voicing Apu Nahasapeemapetilon, of course, the show responded by essentially retiring the character, confining him to background roles. It’s not at all obvious how it’ll handle doing the same with pretty much every Black regular on its roster, or whether it’s finally time for the show to have a non-white person among its regular cast.  (source)
Posted by Anthony Derek Catalano at 9:06 AM