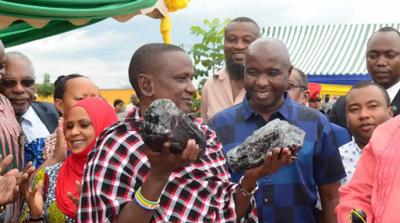 Saniniu Laizer, 52 sold two rough Tanzanite stones, said to be the largest ever found in the country. (TANZANIA MINISTRY OF MINERALS)
By David Aaro
A small-scale miner from Tanzania become an overnight millionaire on Wednesday after he sold two rough tanzanite gemstones said to be the largest ever found in the country.
Saniniu Laizer, 52, announced he would slaughter one of his 2,000 cows and build a school to celebrate. The two dark violet-blue gemstones weighed a total of 33 pounds. He sold them for 7.74 billion Tanzanian shillings ($3.4 million U.S. dollars).
“There will be a big party tomorrow,” Laizer, from the Manyara region, told the BBC. “I want to build a shopping mall and a school. I want to build this school near my home. There are many poor people around here who can’t afford to take their children to school.”  Read more >>
Posted by Anthony Derek Catalano at 7:20 AM