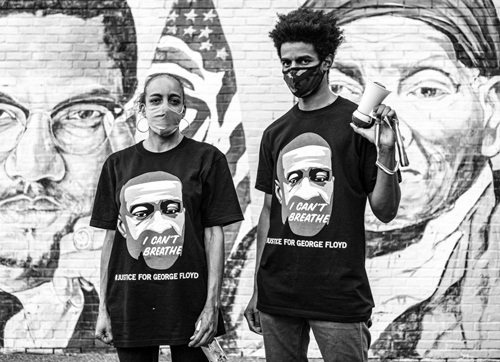 Nicole Harney (left) and her son, Justin, stand in front of a mural of Malcolm X and Harriet Tubman at a protest in New York City. She broke down while watching the video of George Floyd crying for his mother as he died. “We’ve had enough,” Harney said. “I could not stay on Twitter or any other platform. I had to come march outside.”
By Nat Geo
Story and Photographs by Ruddy Roye
As told to Nina Strochlic
The nightly seven o’clock clap for essential workers in New York City feels hypocritical to me. I understand it’s an offering of solidarity and empathy, but a gesture is not enough. In this city, about 75 percent of front-line workers—grocery clerks, bus and train operators, janitors, food delivery people, child care staff—are minorities. They still can’t get approved for a loan to buy property in the neighborhoods they serve or want to live in. They can’t find nutritious food on their blocks. They can’t access quality healthcare. The world they live in is unimaginable to many of those clapping from their homes every night.
The parts of New York hardest hit by the pandemic are overwhelmingly lower-income communities of color. Blacks and Latinos are dying from COVID-19 at twice the rate of white people, according to early data. The front-line workers I’ve been photographing are the same people who face the systemic racism and violence that has fueled a week of protests across America.  Read more >>
Posted by Anthony Derek Catalano at 6:24 AM