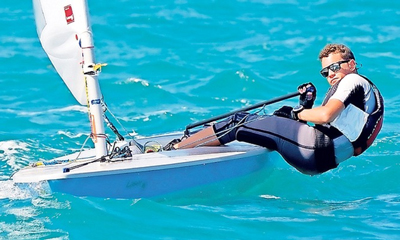 SPENCER Cartwright began his impressive sailing career at the age of eight.
THE Bahamas National Sailing School (BNSS) is pleased to introduce Spencer Cartwright as a top-level international sailor who began his impressive sailing career with the BNSS at the age of eight.
He developed a love for the sport and through hard work, discipline and determination achieved the many extraordinary goals he had set for himself. He has won more junior national championships in the Optimist Dinghy Class than any other sailor in The Bahamas - four to be precise.
He is currently our reigning Laser National Champion (open event, not junior). From the time he started to sail he was always in the top ranks of the classes in which he participated, the main ones being the Laser, Snipe and Sunfish classes in addition to the Optimist Class.
He has made us proud by having represented The Bahamas internationally at major world and regional events, such as Laser Junior World Championships, Optimist World Championships, World Sailing Youth Championships, and Central America & Caribbean Games.  Read more >>
Posted by Anthony Derek Catalano at 7:52 AM