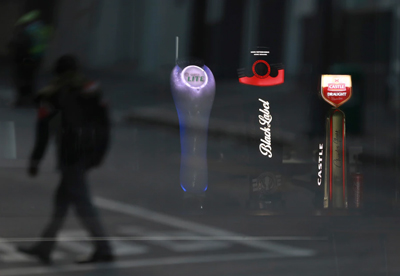 South African Breweries beer on tap at a bar in Cape Town. The Anheuser-Busch InBev subsidiary says it may have to destroy 400 million bottles of beer because of the country’s ban on alcohol sales. (Nardus Engelbrecht/AP)
By Bonolo Mogotsi and Max Bearak
JOHANNESBURG — South Africa has taken some of the most drastic measures in the world to curtail the spread of the novel coronavirus, but one has generated fierce debate like no other: a ban on the sale, and even transport, of alcohol.
Only two other countries — Sri Lanka and Panama — continue to deprive their citizens of that most universal pleasure-giver and painkiller, though much larger India and Thailand recently lifted similar bans.
On one side: drinkers who say their rights are being impinged on and bottle shop owners and liquor companies that are going broke. On the other: a public health system that is unburdened by thousands of monthly hospitalizations resulting from accidents and violence attributed to drunkenness.  Read more >>
Posted by Anthony Derek Catalano at 9:21 AM