Sick staff and empty seats: How Trump's triumphant return to the campaign trail went from bad to worse 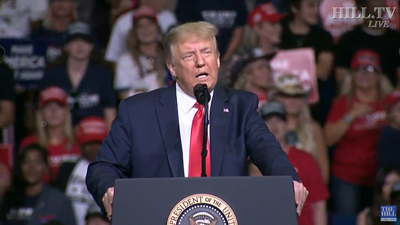 US President Donald Trump speaks at Tulsa rally.
By Kevin Liptak and Kaitlan Collins, CNN
(CNN) - By the time President Donald Trump was gliding in his helicopter toward Joint Base Andrews on Saturday, destined for what he'd once hoped would be a triumphant packed-to-the-rafters return to the campaign trail, things were already looking bad.
Scanning cable news coverage earlier in the day, Trump was disappointed to see pictures not of massive lines forming outside the Bank of Oklahoma Center in Tulsa but of Geoffrey Berman, the federal prosecutor Trump's attorney general had attempted unsuccessfully to dismiss the night before, a person familiar with his response said.
Hours later, the President was informed six campaign staffers in Tulsa had tested positive for coronavirus ahead of his scheduled arrival -- an unfortunate reminder of an ongoing pandemic Trump's critics say he is ignoring. After initially dismissing the revelation, a source familiar with his reaction said Trump erupted when it was subsequently reported in the media -- overtaking coverage of the rally itself.
Still, a determined Trump was intent on breathing new life into his staggering campaign. He took off for Tulsa, convinced large swaths of his supporters would be waiting for him there.
Things did not improve once Air Force One lifted off. The President received a report that only about 25 people were assembled in the overflow space the campaign had reserved for a crowd Trump claimed five days earlier would top 40,000.  Read more >>
Posted by Anthony Derek Catalano at 8:49 AM