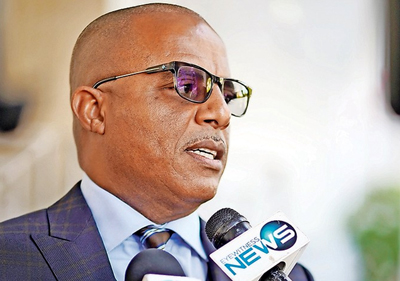 National Security Minister Marvin Dames
By RASHAD ROLLE
Tribune Staff Reporter
rrolle@tribunemedia.net
POLICE lists show that 279 people are still missing after Hurricane Dorian, according to National Security Minister Marvin Dames.
Mr Dames revealed the number yesterday in a statement blasting former Health Minister Duane Sands for comments he made last week criticising the government’s handling of the search for those listed as missing in Hurricane Dorian.
The number given by Mr Dames yesterday is at odds with other figures given out over recent months. On October 9, 2019 Mr Dames told The Tribune 282 people were missing.
On January 14, 2020, the-then commissioner of police Anthony Ferguson said missing person reports were filed for 54 people and last month during a Disaster Recovery Authority press conference Assistant Commissioner of Police Solomon Cash said missing person reports were filed for 33 people.
Police and government officials did not explain the discrepancies when contacted yesterday.
In the national assembly budget debate last week Dr Sands said the administration had squandered its credibility over the issue of the Dorian missing. In particular, he said officials have never explained how hundreds of names of people reported missing were culled from the official list of missing people and he urged the government to clarify matters on the number of people who died.
In his statement yesterday, Mr Dames said his ministry is “shocked and profoundly disappointed” by Dr Sands’ comments. “His recent remarks in the House are particularly surprising given that as the minister of health he played a leading role in the government’s Hurricane Dorian’s response and restoration,” he said.  Read more >>
Posted by Anthony Derek Catalano at 7:59 AM