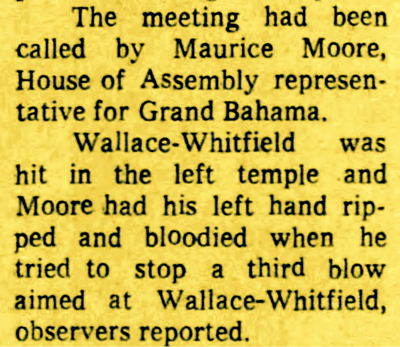 By Bahamianology
Ten men, bent on rendering violence and mayhem, in order to stop a political meeting of rebel PLP members, were only waiting for the opportune moment to strike. Ten men were pretending to be part of a group of some 500 Bahamians waiting eagerly to hear from rebel PLP member Cecil Wallace-Whitfield and others, on that night in November 1970. But, just as Maurice Moore, PLP Member of Parliament for Grand Bahama, stood to call for a rousing prayer, to open the political meeting, at Lewis Yard, Freeport, Grand Bahama, the ten men struck.
They struck hard. Soon, some would be left, on the floor; bloodied and beaten.  Read more >>
Posted by Anthony Derek Catalano at 12:54 PM