Protesters defy curfews but demonstrations across the US turn more peaceful 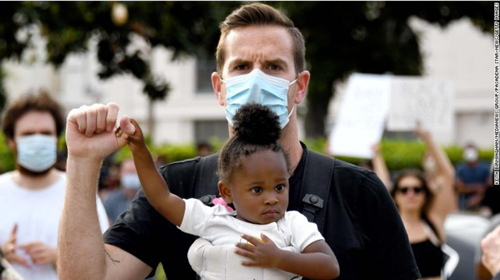 By Madeline Holcombe, CNN
(CNN)Peaceful demonstrators defied curfews and remained on the streets of American cities for another night of protests over the death of an unarmed black man in police custody.
The eighth night of protests saw less violence, fewer police clashes and more acts of civil disobedience.
Unprecedented curfews are in place in Washington, DC, Atlanta, New York City, Cleveland, and several California cities to dissuade gatherings after a weekend of sometimes violent confrontations and looting.
But that didn't stop thousands of people from showing up to call for justice following the death of George Floyd, who died last week after he was pinned to the ground by a Minneapolis police officer with his knee on Floyd's neck for 8 minutes, 46 seconds.  Read more >>
Posted by Anthony Derek Catalano at 4:57 AM