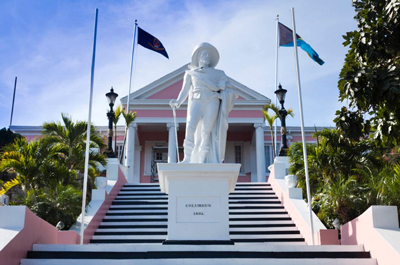 A statue of Christopher Columbus stands at Government House in Bahamas, New Providence Island, Nassau. Walter Bibikow GETTY IMAGES
By Jacqueline Charles
The demands for racial justice reverberating across the United States after the police killing of George Floyd has reached the sweltering shores of the Caribbean, and is fueling new life into an old cause: the removal of monuments with colonial and racist legacies.
Thousands of citizens are demanding the toppling of a colonial-era statue of British naval commander and slavery sympathizer Horatio Nelson in Barbados, and monuments to Christopher Columbus in the Bahamas and Trinidad and Tobago.
Online petitions, launched on Change.org, by Caribbean nationals in the three countries are gaining momentum and have received thousands of signatures in just a few days. In each case, organizers have retraced the racist legacies of Nelson and Columbus, who are memorialized in Britain’s former colonies.  Read more >>
Posted by Anthony Derek Catalano at 5:43 AM