“Outer Banks Season 2” Confirmed By Creator: “Filming of the second season in The Bahamas!” 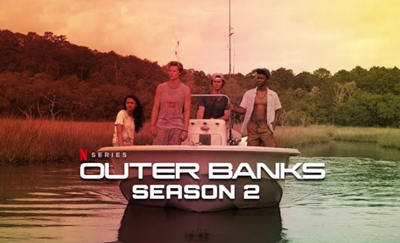 By niharika shrivas
“Outer Banks” is an American action-adventure mystery TV series. The series is created by Josh Pate and Shannon Burke. The series was made for Netflix and debuted on April 15, 2020, with ten episodes.
“Outer Banks Season 2”: Plot
The series is about a group of teenagers known as “Pogues.” They live at the Outer Banks of North Caroline at “The Cut.” The story started when John B’s father went missing, and the group sets out to find him. During their journey to find him, they found that there is a treasure that is related to John B’s father.
As they decide to search for treasure as well, the “Kooks” starts following them because they are after the treasure too. They face battles with the “Kooks” with obstacles in between their friendship, love, and money.
The filming of the second season will take place in The Bahamas. We will see more mysteries and more suspense, and they will return to the place where they left, which is The Cut.  Read more >>
Posted by Anthony Derek Catalano at 7:34 AM