No Layoffs For Bahamasair 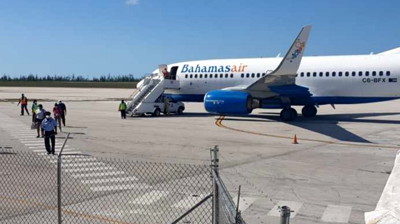 By Jimenita Swain, ZNS
“It is not the intention of the board nor management to reduce any staff.”
That good news applies to Bahamasair’s 595 employees as Minister of Tourism and Aviation, the hon. Dionisio D’Aguilar acknowledged the national airline continues to face significant financial constraints during his budget contribution in the House of Assembly on Wednesday.
While the airline’s subvention has been reduced to 19 million for the 2020/2021 budget cycle, the Aviation Minister says the primary plan is to enhance the airline’s revenues and reduce costs wherever possible.
“Bahamasair was hardly spared the devastating effects of Hurricane Dorian – its revenues were slashed by more than $8 million, particularly as Freeport and Abaco are key highly profitable routes for the airline,” he said.  Read more >>
Posted by Anthony Derek Catalano at 7:13 AM