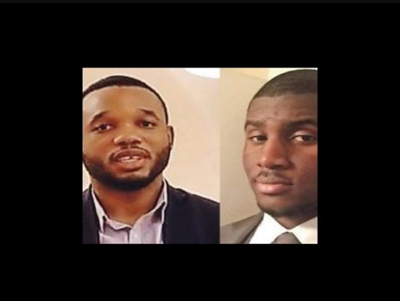 Dr Blair John (left) and Alrae Ramsay (CMC photo)
(CMC)- The Government of the Bahamas says one year after the bodies of two nationals, including a foreign service officer, were pulled from the Po River in Italy, there is no “sense of satisfaction or closure to the families, friends or to the government”.
In a statement marking the anniversary of the deaths, the Ministry of Foreign Affairs said the government “has been and remains fully engaged in the investigation of the case, the outcome of which, to date, has not brought a sense of satisfaction or closure to the families, friends or to the government."
“The Bahamas government, through the engagement of an Italian Law Firm, continues to press the Italian government for answers as to the cause of their untimely deaths,” the ministry added..
Last year, the bodies of Alrae Ramsey, 29, a foreign service officer and Dr. Blair John, 28, were discovered by Italian authorities in waters of the River Po in Turin, on June 4 and 5.
Initial forensic medical examination indicated that the men were in the river for two to three days, according to international reports.
The autopsies which were performed on both bodies indicated that the men died from drowning.
Toxicological examinations were also performed and Italian news agencies reported that the results revealed that no drugs were found in the system of both men, but there were traces of alcohol.  Read more >>
Posted by Anthony Derek Catalano at 6:23 AM