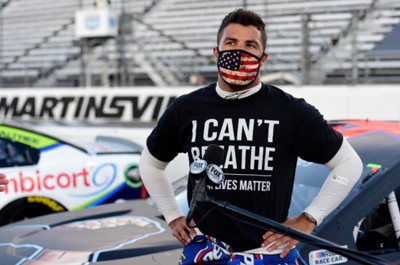 A noose was found in Bubba Wallace's garage stall at Talladega Superspeedway Sunday afternoon, NASCAR announced. Wallace is NASCAR's only black full-time driver and recently led the push to ban the Confederate flag from NASCAR events.

The race itself — the NASCAR Cup Series GEICO 500 — was postponed until Monday due to rain.

"We are angry and outraged, and cannot state strongly enough how seriously we take this heinous act," NASCAR said in a statement Sunday night. "We have launched an immediate investigation, and will do everything we can to identify the person(s) responsible and eliminate them from the sport."  Read more >>
Posted by Anthony Derek Catalano at 6:16 AM