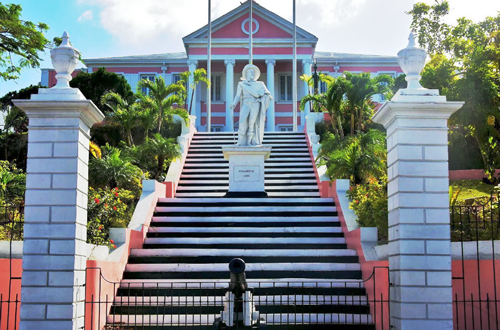 By  Matthew Moxey
NASSAU, BAHAMAS — A petition to remove the statue of Christopher Columbus had garnered more than 3,500 signatures last night.
The statue, which sits on the front steps of Government House overlooking Downtown Nassau, has become increasingly controversial in recent years reflecting global attitudes towards historic monuments depicting colonial figures.
The Italian explorer who “discovered” the new world when he landed on San Salvador in 1492 has come under increased scrutiny, with historical texts linking his storied pilgrimage to murder, rape, slavery, and genocide.
The most recent change.org petition was created by Craig Woodside yesterday afternoon, and within two hours had garnered more than 1,000 signatures.
Woodside points to “Columbus’ use of torture and dismemberment while serving as governor of a Spanish colony in the Bahamas/Caribbean earned him a reputation for shocking sadism.”
The Government House statue was erected in 1830 by Lord Carmichael in Columbus’ honour.  Read more >>
Posted by Anthony Derek Catalano at 5:12 AM