McPhee: This will be the hardest 14 days of his life 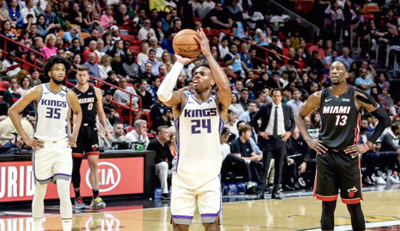 HEILD TEST POSITIVE FOR COVID-19 – Grand Bahamian and shooting guard for the Sacramento Kings, Chavano “Buddy” Hield (center) is one of the few National Basketball Association’s (NBA) players to have tested positive for COVID-19 ahead of the league’s re-start set for July 30. The news was reported by The Athletic’s Shams Charania, June 24. Two of his teammates, center Alex Len and forward Jabari Parker also tested positive for the virus. There was no report on where each player contracted the virus. (AP PHOTO)
By FN Sports Reporter Shayne Stubbs
In light of the recent discovery of hometown superstar Chavano “Buddy” Hield testing positive for COVID-19, the Sacramento Kings’ shooting guard has received a number of well wishes from residents on social media platforms and otherwise.
The Freeport News reached out to longtime coach Gladstone “Moon” McPhee, who, has a well-documented history with the 6’5’’ guard. Much like everyone the news came as a surprise.
While there was no report on where Hield could have contracted the virus, the sharpshooter’s performance in the Skinz League went viral. He scored 45 points while sinking 13 three-pointers. The game was played in Oklahoma City earlier this month.
“I am surprised. But, I found out he was working out. He just loves the game so much. We all believe at times it won’t happen to us, but it just happened and it’s unfortunate.
“I know this will be the hardest 14 days in his life whereby he can’t play or workout, and he loves the game so much. All we can do is keep him in our prayers,” said McPhee.
Hield is one of several National Basketball Association’s (NBA) players to have tested positive for COVID-19, just ahead of the league’s re-start set for July 30.  Read more >>
Posted by Anthony Derek Catalano at 9:03 AM