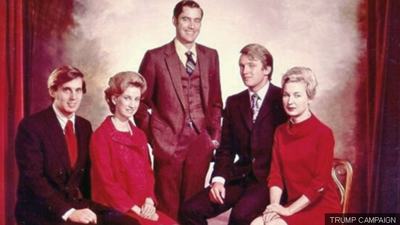 An undated photo of the Trump siblings, from right: Maryanne, Donald, Fred, Elizabeth and Robert.
US President Donald Trump's niece is set to publish an unflattering tell-all memoir about him. So who is she and why has she come forward now?
On 28 July, Mary Trump is due to release Too Much And Never Enough: How My Family Created the World's Most Dangerous Man, Simon & Schuster announced on Monday.
The book will hit the shelves just weeks before the Republican National Convention, when her uncle will accept the party's nomination for his re-election bid in November.
The memoir will reportedly reveal how she supplied the New York Times with confidential documents to print a sprawling investigation into Mr Trump's personal finances.
The Pulitzer Prize-winning exclusive alleged the president had been involved in "fraudulent" tax schemes and received more than $400m (£316m) in today's money from his father's real estate empire.
An Amazon blurb for the book says the author will set out how her uncle "became the man who now threatens the world's health, economic security and social fabric".
"She explains how specific events and general family patterns created the damaged man who currently occupies the Oval Office, including the strange and harmful relationship between Fred Trump and his two oldest sons, Fred Jr and Donald," it continues.
The blurb says the author will draw on her insights as a "firsthand witness to countless holiday meals and family interactions".
The memoir will also accuse the president of having "dismissed and derided" his father once he began to suffer from Alzheimer's.  Read more >>
Posted by Anthony Derek Catalano at 5:24 AM