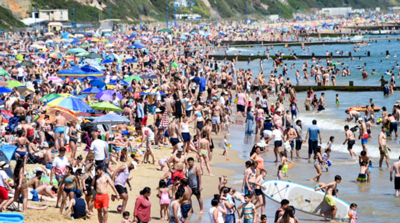 A major incident has been declared in Bournemouth as crowds flock to the beach.
Finnbarr Webster/Getty Images
By Jack Guy, CNN
(CNN) — Officials in southern England have declared a "major incident" after thousands of people flocked to local beaches.
Bournemouth and Sandbanks, in Dorset, were hit particularly hard as crowds came to enjoy the hottest day of the year so far, according to a statement released Thursday by local authority Bournemouth, Christchurch and Poole (BCP) Council.
Despite advice to stay away from the area, it was overrun with cars and sunbathers, leading to gridlock, illegal parking and anti-social behavior. By Thursday morning, more than 40 tons of waste had been removed from the coastline.
Council leader Vikki Slade said she was "absolutely appalled" by the scenes.
"The irresponsible behavior and actions of so many people is just shocking and our services are stretched to the absolute hilt trying to keep everyone safe," said Slade in the statement. "We have had no choice now but to declare a major incident and initiate an emergency response."  Read more >>
Posted by Anthony Derek Catalano at 6:04 AM