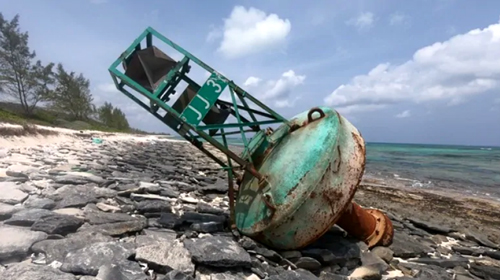 This buoy went missing from its position off Scaterie Island and was found more than two years later on a beach in the Bahamas. (Submitted/Al Otis)
By Wendy Martin · CBC News
A buoy from Cape Breton has quite a tale to tell.
The Canadian Coast Guard buoy — a navigational aid for mariners — went missing off Scaterie Island, near Louisbourg, N.S., in January 2018.
This past March, more than two years later, it washed up on the shores of Cat Island in the Bahamas.
Dave Hebert, a research scientist with the federal Department of Fisheries and Oceans, said the buoy likely had a transatlantic voyage, and then some.
Hebert said he thinks the buoy's adventure began with a fairly quick trip to Europe, courtesy of the Gulf Stream, a powerful ocean current just off the coast of Nova Scotia.  Read more >>
Posted by Anthony Derek Catalano at 4:54 AM