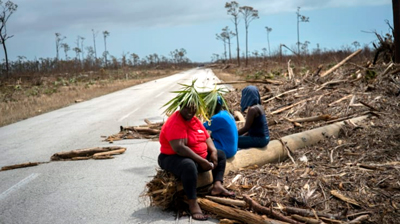 Women cover their heads with palmetto leaves as they rest on the road after the passage of Hurricane Dorian near High Rock in the Bahamas on September 5, 2019.
Ramon Espinosa | AP
By Chloe Taylor
Small island states will be hit by a “perfect storm” in the coming months as the Covid-19 pandemic and extreme weather conditions strike simultaneously, the head of the Commonwealth has warned.
Patricia Scotland, secretary-general of the Commonwealth — an alliance of 54 countries with a combined population of 2.4 billion people — told CNBC in a phone call that several economies will be forced into a “perilous” situation this year by the overlapping crises.
“We’ve been trying really hard to get the world to wake up to the real perilous state in which many of our small states are,” she said. “We have three quite terrifying things intersecting.”
The interaction between the pandemic, the resulting economic downturn, a slump in tourism and the rising prevalence of extreme weather events meant many Caribbean and Pacific Island nations were now facing “the perfect storm,” she said.  Read more >>
Posted by Anthony Derek Catalano at 5:25 AM