How Fast, or Slow, a Hurricane Moves Can Be as Important as Its Intensity 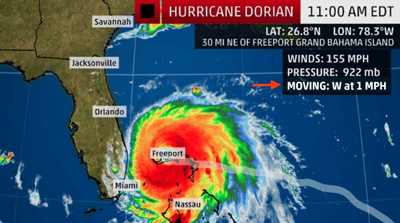 Satellite image and NHC advisory information while Hurricane Dorian was over the northwestern Bahamas on Sept. 2, 2019.
By Jonathan Erdman
How fast, or slow, a hurricane or tropical storm moves is an important factor that influences the severity of its impacts and is worth as much attention as its maximum winds.
Let's face it, a hurricane's winds tend to hog the spotlight. It's probably the first thing you notice on a graphic or while hearing a forecast.
The "Category 1, 2, 3, 4 or 5" labels you hear associated with a hurricane are based on the Saffir-Simpson Hurricane Wind Scale. That gives an idea of a storm's wind damage potential, but it doesn't necessarily correlate to the magnitude of its storm surge, rainfall or its ability to spawn tornadoes.
But there is another statistic that doesn't usually stand out, but you'll typically see on a graphic. A storm's forward speed can play a major role in the damage it is able to inflict.  Read more >>
Posted by Anthony Derek Catalano at 7:00 AM