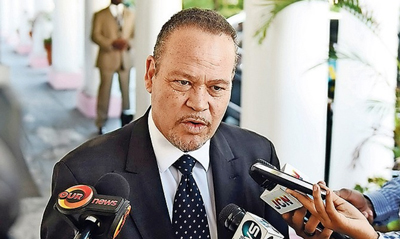 Attorney General Carl Bethel
By NEIL HARTNELL
Tribune Business Editor
nhartnell@tribunemedia.net
The Government is "betwixt and between" over the Registrar General's Department's cyber security woes after being forced to again shut down its online database following fresh hacking attempts.
Carl Bethel QC, the attorney general, told Tribune Business that the agency's online portal was closed "last week" after the Royal Bahamas Police Force (RBPF) detected fresh "incursions" that were traced back to Internet Protocol (IP) addresses in two eastern European countries.
While Mr Bethel declined to name the states involved, this newspaper understands from separate sources that the latest efforts to penetrate the Registrar General's Department originated from Russia and Bulgaria - both of which are known as established sources of hacking and cyber crime.
He blamed the latest series of hacks on the former Christie administration's failure to properly implement the recommended security measures when the Registrar General's Department was hacked for the first time, slamming the situation as "inconceivable".
However, these claims were yesterday refuted by his predecessor as attorney general, Allyson Maynard-Gibson. She told Tribune Business that "every technological upgrade" required under her watch was implemented, and that the Minnis administration needs to start taking responsibility given that it was elected to office more than three years ago.  Read more >>
Posted by Anthony Derek Catalano at 9:01 AM