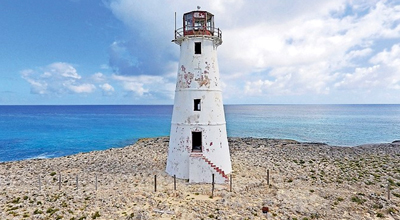 The Nassau Lighthouse. Photo: Terrel W. Carey/Tribune Staff
By NEIL HARTNELL
Tribune Business Editor
nhartnell@tribunemedia.net
The Bahamian entrepreneur behind the proposed $2m renovation of Paradise Island's lighthouse yesterday said he refuses to continue "begging like a Joncer" after taking his battle with the Government to court.
Toby Smith, principal of Paradise Island Lighthouse & Beach Club Company, confirmed to Tribune Business he has initiated legal action to force the Government to honour the Crown Land lease agreement he executed in early January for two separate parcels at Colonial Beach.
Disclosing that he has hired Wayne Munroe QC to lead his action, Mr Smith vowed he is "not going around the Mulberry Bush again" after efforts to obtain all necessary approvals for his 'beach break' destination - complete with lighthouse history, tours and Bahamian culture - went into their ninth year.
Venting frustration that his plans, which would create 40 Bahamian construction jobs and a similar number of full-time posts, had been dashed just when his goal was in sight, Mr Smith argued that the Minnis administration's failure to honour the Crown Land Lease sends "a very dangerous message" to both the local and international investors that are desperately needed to revive the economy post-COVID-19.  Read more >>
Posted by Anthony Derek Catalano at 6:55 AM