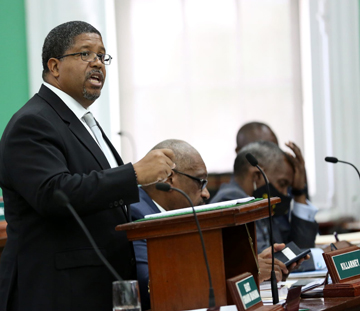 Minister of Finance K Peter Turnquest (BIS)
By Natario McKenzie
NASSAU, BAHAMAS — Deputy Prime Minister and Minister of Finance K Peter Turnquest yesterday contended the Minnis administration has increased Government debt by $977 million since taking office.
Turnquest said the sum represented the “net borrowing”, which comprises gross borrowing and total debt repayment for the first two full years in office.
“When you take the difference between gross borrowing and debt repayment, you get net borrowing, which is in fact the true and proper measure of Government borrowing,” he said.
“Furthermore, our net borrowing favourably compares to the Opposition, who increased Government Debt by $1.2 billion during their first two full years in Office. It only requires basic math to know that $1.2 billion is bigger than $977 million.
“In other words, the Opposition borrowed more money in its first two full years than this Administration has so far,” he added.  Read more >>
Posted by Anthony Derek Catalano at 6:59 AM