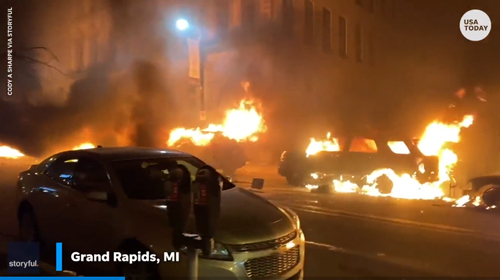 US protests turn violent
By John Bacon, Jordan Culver, Chris Woodyard - USA TODAY
A relatively calm day gave way to another night of unrest in Minneapolis in the wake of George Floyd's death, while protesters and police clashed at demonstrations across the U.S. for the sixth straight night.
Minneapolis Police Chief Medaria Arradondo apologized to Floyd's family. He said firing Derek Chauvin – the officer seen holding his knee to Floyd's neck for more than eight minutes, resulting in his death – and the other three officers involved in the incident was the right thing to do. Also, Gov. Tim Walz announced state Attorney General Keith Ellison would lead the prosecution in the Floyd case.
Peaceful protests continued to be marred by violence. The Minneapolis Department of Public safety confirmed a semi-truck drove into a group of peaceful protesters on Interstate 35. The driver of the truck was taken into custody, but not before protesters pulled him from the truck's cab. The driver was taken to the hospital with minor injuries.  Read more >>
Posted by Anthony Derek Catalano at 5:09 AM