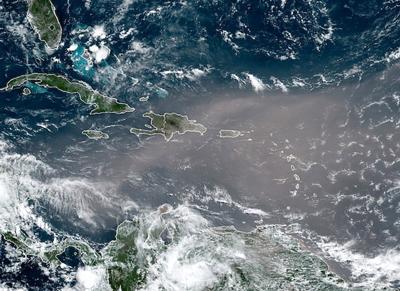 This satellite photo from Monday, provided by the National Oceanic and Atmospheric Administration, NOAA, shows a cloud of dust coming from the Sahara desert. (NOAA via AP)
By EARYEL BOWLEG
ebowleg@tribunemedia.net
MASK wearing as well as taking other precautions is recommended for those with allergies and respiratory illness as a plume of Sahara dust is predicated to impact some parts of the Bahamas this week.
Known as the Saharan Air Layer (SAL), a vast cloud of the dust was reported earlier this week to reach parts of the Caribbean. The Weather Channel stated the plume is noted for its thickness over the Caribbean Sea.
Michael Stubbs, chief climatological officer at the Bahamas Department of Meteorology, told The Tribune the plume was expected to impact southern Bahamas yesterday and will appear in Nassau and the northern Bahamas at least by today.  Read more >>
Posted by Anthony Derek Catalano at 6:40 AM