Eight months later, The Bahamas are still rebuilding from Dorian and the keys are still helping 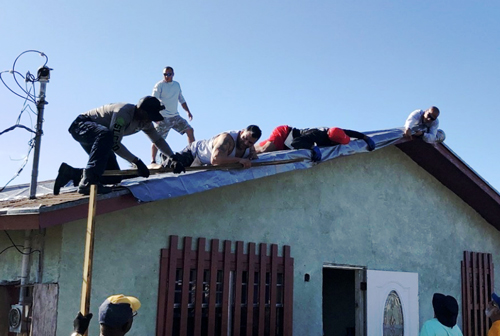 Lions club members work to tarp and repair roofs in the Bahamas in the aftermath of Hurricane Dorian. WILLIAM GONZALEZ/Contributed
By Tiffany Duong
On September 1, Hurricane Dorian made landfall in Elbow Cay, Bahamas as a Category 5 storm with sustained winds up to 185 mph. A few hours later, it reached Grand Bahama, where it stalled for a day, creating 24-foot storm surges on the islands.
According to the National Weather Service, Dorian is the most intense tropical cyclone ever to strike the Bahamas and is regarded as the worst natural disaster in the country’s history. Beyond the force of the winds and water, Dorian was particularly destructive because it hovered near Freeport for over 24 hours.
Six days later, William Gonzalez, president of the Marathon Lions Club, and other Lions Club team members arrived via ferry at Freeport. They brought with them 45 tons of food, water and supplies at a total cost of around half a million dollars, Gonzalez estimated.  Read more >>
Posted by Anthony Derek Catalano at 7:26 AM