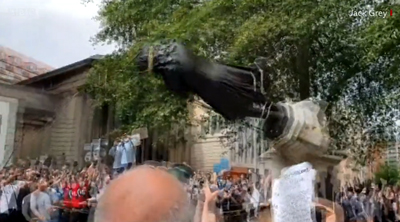 Protesters in Bristol pull down a statue of slave trader Edward Colston.
A statue of a slave trader which was torn down during an anti-racism protest in Bristol was "an affront", the city's mayor has said.
Marvin Rees said he felt no "sense of loss" after the bronze statue of Edward Colston was pulled down using ropes and thrown into the harbour on Sunday.
The statue of the prominent 17th Century slave trader has been a source of controversy in the city for years.
Avon and Somerset Police said a decision was taken not to intervene.  Read more >>
Posted by Anthony Derek Catalano at 4:25 AM