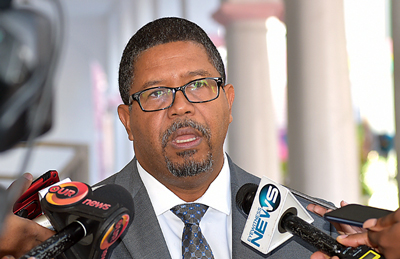 DPM and Minister of Finance Peter Turnquest
By Jasper Ward
Deputy Prime Minister and Minister of Finance Peter Turnquest said yesterday the government has allocated nearly $40 million in direct funding to address a potential second wave of the COVID-19 pandemic in the upcoming budget year.
His comments came one day after Progressive Liberal Party (PLP) Leader Philip Brave Davis accused the government of not preparing for the possible resurgence of the virus when The Bahamas reopens its borders on July 1.
“Mr. Speaker, I don’t see anything in this budget that acknowledges this possibility, let alone plans for it,” Davis said on Tuesday.
However, Turnquest shot that down yesterday.
“It’s obvious that the opposition has been ill-informed or has not had the opportunity to review the budget allocations in detail despite having possession of the detailed budget book for over three weeks now,” the minister told The Nassau Guardian.
“A careful review of the budget book would determine that the Ministry of Health has been allocated $21 million, specifically, to address COVID-19 testing, treatment and mitigation, including equipment and supplies.  Read more >>
Posted by Anthony Derek Catalano at 9:08 AM