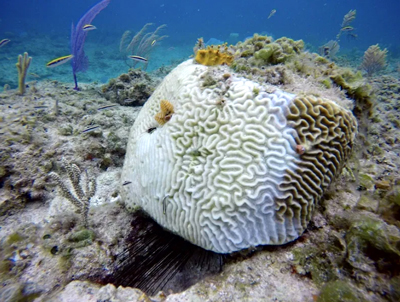 Writer: Tosheena Blair
Stony Coral Tissue Loss Disease (SCTLD) is taking a firmer hold of the nation according to a newly released report by the Perry Institute for Marine Science (PIMS).
The non-profit organization committed to protecting oceans confirmed the occurrence of the disease in New Providence – the gateway to The Bahamas – less than three months after its deadly presence in Grand Bahama was publicly revealed.
SCTLD has ravaged reef-building corals and endangered species alike as it moves undetected on the currents of waves and likely in the ballast water from ships.
The only sign of its troubling presence is the white exposed skeleton left in its wake.
On June 4, a rapid assessment team led by PIMS senior scientist, Dr Krista Sherman surveyed the six sites between Columbus Cove on the northwest end of the island and Lighthouse Boulders, off the western end of Paradise Island near the entrance to the port of Nassau.
Spurring investigations were several photos sent by Jenna Chaplin, a concerned Nassau resident. The photos suggested stony corals surrounding New Providence were losing tissue, just like vast areas of shallow reefs in Grand Bahama, whose infection PIMS confirmed in March.  Read more >>
Posted by Anthony Derek Catalano at 5:47 AM