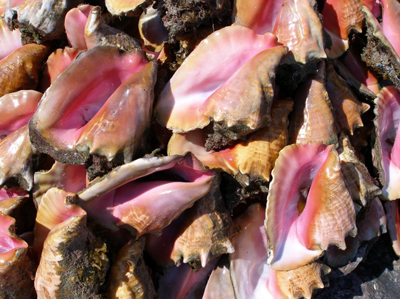 Live conch in shells - PhotoⒸDerek Catalano
By LEANDRA ROLLE
Tribune Staff Reporter
lrolle@tribunemedia.net
A NEW study has documented evidence of a thriving conch population located at a remote bank in The Bahamas, bringing hope for conch conservationists.
The research published in Aquatic Conservation: Marine and Freshwater Ecosystems by scientists at the University of Texas found that “one of the three highest abundances of queen conch” in the wider Caribbean is located in Cay Sal Bank, which is a secluded area that is distant from most of those who fish. The discovery came after a research team, led by authors of the study - Philip Souza Jr and Andy Kough - was formed to survey the conch population during the conch mating season in June 2018.
Researchers said conch abundance data was collected and analysed by using several methods to estimate the overall stock size.
“The stock estimates were all in agreement that the Cay Sal Bank population numbers were one of the highest surveyed in the Caribbean. The shells’ length and thickness were also measured to estimate the relative age of the population, revealing some of the thickest shells—thus, oldest conch—surveyed in The Bahamas,” the report added.
Mr Souza Jr said the secluded bank was “logistically” challenging for researches to study as they were not certain what they would find.  Read more >>
Posted by Anthony Derek Catalano at 5:38 AM