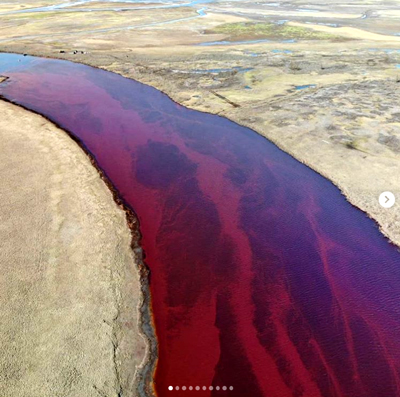 By George Dvorsky
Russian President Vladimir Putin has declared a state of emergency after an estimated 20,000 tons of diesel fuel poured out of a fuel tank and into a nearby river. The spill—possibly the worst of its kind in the Arctic region—is being attributed to melting permafrost, yet another sad impact of climate change.
The diesel spill happened last Friday afternoon at a power station near the Siberian city of Norilsk. CNN reported that the company responsible for the tank, Norilsk Nickel, initially tried to contain the spill on its own without alerting state officials to the problem. Alexander Uss, the local governor, became aware of the spill two days later after “alarming information” appeared on social media, according to BBC.
A hefty portion of the diesel fuel poured into the nearby Ambarnaya River, which feeds Lake Pyasino, a major body of water. The spill now encompasses an area measuring 135 square miles (350 square kilometers) and has drifted some 7.5 miles (12 kilometers) from the power plant, per the BBC.
Photos taken in the Norilsk region show the Ambarnaya River colored in unsightly hues of red. Rosprirodnadzor, a Russian environmental watchdog, reports that contaminants are now tens of thousands of times over permissible levels. The spill is quite possibly the worst to happen in Russia’s Arctic region and could be an environmental calamity felt in the fragile region for years to come.  Read more >>
Posted by Anthony Derek Catalano at 2:39 PM