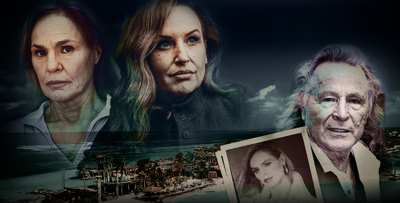 Two Canadian women have come forward to say they were raped by fashion designer Peter Nygard. An investigation by The Fifth Estate confirms key elements of their allegations are backed up by witnesses, confidants, family members, and in one case, an RCMP officer. Nygard says their stories are 'false' and a 'lie.'
By Timothy Sawa, Lynette Fortune and Bob McKeown
WARNING: This story contains graphic details.
The doorbell rang one fall day in 1993, dropping a bomb on April Telek's seemingly storybook life in North Vancouver.
A box of free clothes had arrived from a Canadian designer for the up-and-coming model and actor.
The 20-year-old had recently represented Canada on the international pageant circuit, spent a year as a fashion model in Japan and had just filmed a commercial as the spokesmodel for Dairy Queen.
Her career was on fire.
It wasn't uncommon for companies to send her clothing to wear. That wasn't the issue. It was where it came from.
By 1993, Peter Nygard had made millions selling women's clothing around the world. The Winnipeg-based clothing manufacturer had factories in Asia, a multimillion-dollar marketing headquarters in Toronto and a 150,000-square-foot Mayan-styled estate in the Bahamas, surrounded by the sparkling Caribbean Sea.
Telek had also recently been offered an opportunity by Nygard to do some modelling for one of his new clothing lines in Winnipeg.
That’s when she said he held her against her will and raped her.  Read more >>
Posted by Anthony Derek Catalano at 7:29 AM