Brazil passes 1 million coronavirus cases with no end in sight 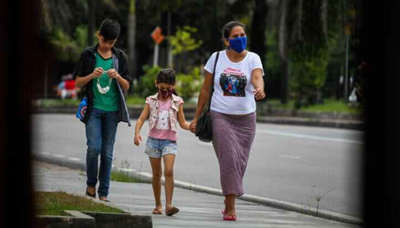 A woman wearing a face mask walks down a street with two children. In view of the rapidly increasing number of corona infections in Brazil, the US government has imposed extensive entry restrictions on people from the South American country. Lucas Silva | picture alliance via Getty Image
By Reuters
Brazil passed 1 million coronavirus cases on Friday and approached 50,000 deaths, a new nadir for the world’s second worst-hit country as it struggles with a tense political climate and worsening economic outlook.
Second only to the United States in both cases and deaths, Brazil confirmed its first case of the novel coronavirus on Feb. 26. The virus has spread relentlessly across the continent-sized country, eroding support for right-wing President Jair Bolsonaro and raising fears of economic collapse after years of anemic growth.
Brazil reported 1,032,913 confirmed cases on Friday, with 1,206 new deaths to take total official fatalities to 48,954, the Health Ministry said. Friday also saw a new record daily number of cases, with 54,771, suggesting the outbreak is far from over. Brazil is likely to surpass 50,000 deaths on Saturday, although weekend reporting can be lower.  Read more >>
Posted by Anthony Derek Catalano at 6:39 AM