Beaches, parks to open on June 29 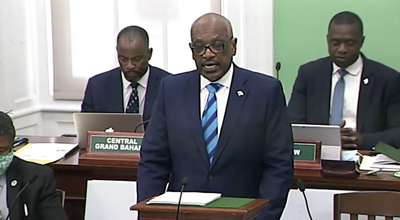 Prime Minister Dr Hubert Minnis wrapping up the budget debate in the House of Assembly.
By Royston Jones Jr.
Failure to wear facial masks will result in heavy fines.
NASSAU, BAHAMAS — Prime Minister Dr Hubert Minnis today announced the national nightly curfew has been pushed back by one hour and public parks and beaches on New Providence, Grand Bahama and Bimini will reopen on June 29.
However, Minnis made clear there will be no “beach parties” and the size of groups will be limited on the beach.
According to the prime minister, the emergency powers will be extended throughout the month July.
Gyms, outdoor group exercise and spas may also reopen on July 1 with safety protocols approved by the Ministry of Health, Minnis said.
As of today, the national curfew will now be in effect from 10pm to 5 am.
“It is only an hour,” Minnis acknowledged while wrapping up the budget debate in Parliament.
“That is necessary as I progress you would see as certain sectors of society open additional time is necessary.”
The prime minister said business operation hours will also be extended for an hour, until 8pm.
The country will reopen to commercial air travel on July 1.
All individuals, with some exceptions, will be required to present negative PCR tests for COVID-19.
Those tests will be valid for up to 10 days.  Read more >>
Posted by Anthony Derek Catalano at 10:09 AM