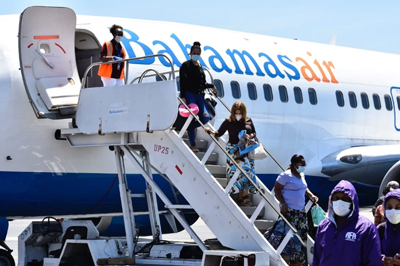 Returning residents disembark Bahamasair plane in New Providence (BIS Photos/Kemuel Stubbs)
By Natario McKenzie
NASSAU, BAHAMAS — Bahamasair chairman Tommy Turnquest said yesterday the airline has joined carriers such as American Airlines and United Airlines in scrapping social distancing protocols on flights, telling Eyewitness News that it was both impractical and unprofitable.
Turnquest said: “A month ago we were talking about not using the middle seats on the jets and then the question was what do you do with the ATRs which are only two seats across. On a 70 seater you lose 35 seats and on a 50 seater you lose 25 seats as opposed to a jet where you lose a third of the seats. It just wasn’t profitable. We would be going along with all the other protocols in terms of PPEs, ensuring everyone wears a mask, the screening and so forth but we will not be able to physical distance on the plane. Six weeks ago that wasn’t the thinking but the airline industry has come out with a different approach,” said Turnquest.
He added, “The seats are only 18 inches apart and it’s very difficult to get three to six feet as suggested. The airline industry decided that there would not be any social distancing on the airlines. This was essentially industry wide.”  Read more >>
Posted by Anthony Derek Catalano at 9:41 AM