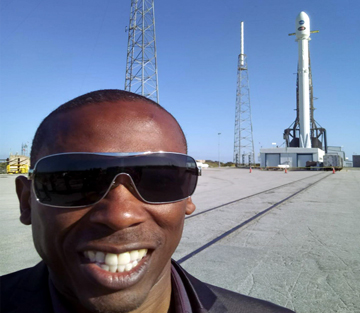 Dr. Denton Gibson
By Rachel Knowles
As SpaceX successfully launched its first two people into orbit over the weekend, Dr. Denton Gibson, a Bahamas-born systems engineer who played an integral role in the history-making project, breathed a sigh of relief.
Gibson, who lives in Orlando, Florida, is a vehicle system engineering discipline expert at the National Aeronautics and Space Administration (NASA).
He has been working at NASA for over 15 years, but said this was the first time he was responsible for human lives, and the high stakes were nerve-wracking.
“I would definitely say sitting there on console watching all the data coming from the launch vehicle and just going through the countdown and working out any issues and stuff like that, it was exciting and scary at the same time,” Gibson said.
“It was scary in the sense that we’ve been used to launching satellites and space probes for a long time. If one of those would have failed, yeah it’s a few hundred million dollars, but it can be rebuilt.
“In this case, there are people on board. If it fails, people lose their lives. You can’t rebuild somebody’s life. So, that was the part that made me nervous.”
Gibson added, “I was very stressed out going into this.”
SpaceX became the first private company to launch astronauts for NASA on Saturday.  Read more >>
Posted by Anthony Derek Catalano at 8:10 AM