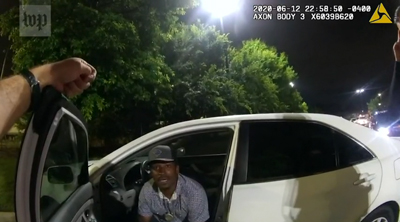 Video shows how the June 12 fatal shooting of Rayshard Brooks, 27, at an Atlanta Wendy's unfolded and how protesters and officials have responded. (The Washington Post)
By Katie Shepherd
Hours after the Fulton County district attorney announced felony murder and other charges against the former Atlanta police officer who fatally shot Rayshard Brooks, a 27-year-old black man, in the back, a number of Atlanta police officers called in sick just before a shift change Wednesday evening.
The city was left scrambling to cover absences as the Atlanta Police Department tried to tamp down rumors of a mass police walkout that spread widely on social media.
It’s unclear how many officers declined to show up for their Wednesday night shift. The police department declined to answer specific questions about the no-shows and the mayor did not release specific numbers when she spoke to reporters late Wednesday.  Read more >>
Posted by Anthony Derek Catalano at 6:28 AM