After Record Number Of New Daily Coronavirus Cases, WHO Warns Of ‘New And Dangerous’ Phase 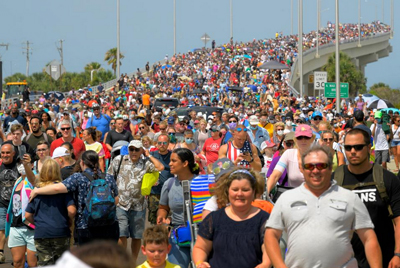 TITUSVILLE, FL - MAY 30: People, many without masks, gather to watch the Space X flight take off. John McDonnell/The Washington Post via Getty Images
By Alexandra Sternlicht, Forbes News
A single-day record of 150,000 new coronavirus cases were reported worldwide on Thursday, leading the World Health Organization’s director-general to warn that the pandemic has reached a “new and dangerous” phase.
Key Facts
➧Cases in the Americas accounted for almost half of the total, with infections rising in Mexico, the southern United States, Brazil, Peru, Chile, Venezuela and other South American countries.
➧“Countries are understandably eager to open up their societies and economies,” said WHO Director-General Tedros Adhanom Ghebreyesus at a Friday press conference. “But the virus is still spreading fast. It is still deadly and most people are still susceptible.”
➧Tedros advised that “only by putting politics aside and working in true collaboration can we make a difference.”
➧He said he is particularly concerned about low- and middle-income countries and refugee populations, saying that the “most vulnerable will suffer most.”
Big Number
8,546,919. That’s how many confirmed coronavirus cases have been reported around the world, with 456,726 fatalities, according to Johns Hopkins data.  Read more >>
Posted by Anthony Derek Catalano at 2:00 PM