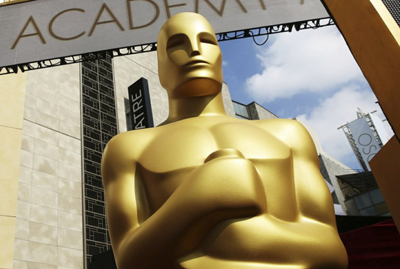 In this Feb. 21, 2015 file photo, an Oscar statue appears outside the Dolby Theatre for the 87th Academy Awards in Los Angeles. The Oscars are implementing some big changes, including having a set number of best picture nominees and to-be-determined representation and inclusion standards for eligibility. The Academy of Motion Picture Arts and Sciences says Friday that there will be 10 best picture nominees beginning with the 94th Academy Awards in 2022. (Photo by Matt Sayles/Invision/AP, File)
By Lindsey Bahr
For the fourth time in its history, the Oscars are being postponed. The Academy of Motion Picture Arts and Sciences and the ABC Television Network said Monday that the 93rd Academy Awards will now be held April 25, 2021, eight weeks later than originally planned because of the pandemic’s effects on the movie industry.
The Academy’s Board of Governors also decided to extend the eligibility window beyond the calendar year to Feb. 28, 2021, for feature films, and delay the opening of the Academy Museum of Motion Pictures from December until April 30, 2021.
“Our hope, in extending the eligibility period and our Awards date, is to provide the flexibility filmmakers need to finish and release their films without being penalized for something beyond anyone’s control,” said Academy President David Rubin and Academy CEO Dawn Hudson in a joint statement.  Read more >>
Posted by Anthony Derek Catalano at 5:10 AM