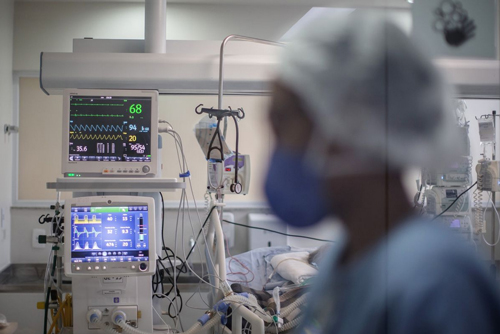 A medical worker monitors a patient in the Covid-19 intensive care unit at a hospital in Sao Paulo, Brazil, on May 15.  Photographer: Jonne Roriz/Bloomberg

As Brazil solidifies its status as the world’s new coronavirus hotspot, the nation’s disjointed response is fueling concern that the worst is yet to come.

There’s no health minister after two officials who occupied the top post left following clashes with President Jair Bolsonaro, who has dismissed efforts to slow the disease’s spread. Only about 800 of the 15,000 ventilators bought by the federal government have been distributed due to problems with logistics. Sao Paulo, the epicenter of cases and the country’s financial hub, announced a last-minute, six-day public holiday after plans to restrict traffic flopped, sowing confusion among businesses and workers.

Investors are growing increasingly concerned that leaders aren’t up to the task at hand as cases soar. In the past few days, Brazil has overtaken Spain, Italy and the U.K. and now trails only Russia and the U.S. in confirmed Covid-19 infections. The latest data show 254,220 people have tested positive, and almost 17,000 deaths from the disease -- numbers that don’t reflect the true scope of the outbreak given a widespread lack of testing. Meanwhile, Brazilian stocks and its currency are the world’s worst performers.  Read more >>
Posted by Anthony Derek Catalano at 3:23 PM