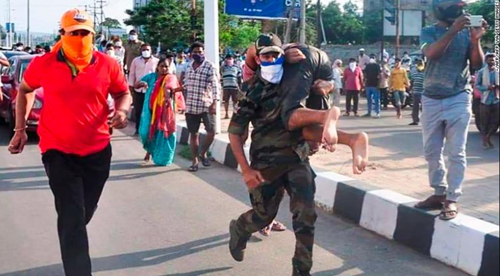 Thousands of people have been evacuated after a gas leak at an LG Polymers plant in Visakhapatnam in southern India.

(CNN) - Bodies lay crumpled on the ground beside toppled motorcycles and cars as suffocating toxic gas rose from a chemical plant in southern India in the early hours of Thursday morning.

Roads near the site of the fatal leak in the state of Andhra Pradesh were filled with hundreds of people fleeing the noxious gas, according to footage from the scene, many carrying the injured and unconscious over their shoulders.

At least 11 people have been confirmed dead and hundreds more have been hospitalized after the incident at LG Polymers plant, which lies near a village of at least 3,000 people on the outskirts of the city of Visakhapatnam.  Read more >>
Posted by Anthony Derek Catalano at 7:48 AM