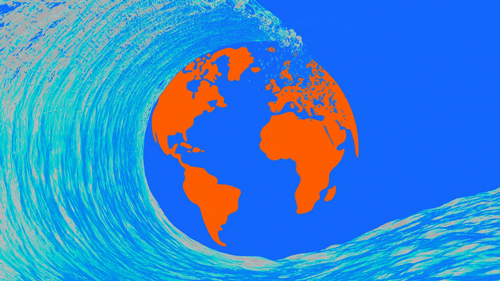 Western capitals aren't just worried about the risk of a resurgence in coronavirus cases.
Shutterstock / The Atlantic

With most European countries confident that they are past the worst of the coronavirus pandemic, their attention is turning to the chance of its resurgence once society returns to some semblance of normal. But beyond the epidemiological challenges lies a slowly amassing threat that is not pathological in nature, but economic, political, and military. This is the geopolitical second wave, and its power is already starting to concern Western leaders.

Imagine a scenario: Just as Europe and the United States begin to feel as if they have the coronavirus under control, it takes hold in the developing world. Exhausted, indebted, and desperate for their own economies to get back up to speed, richer countries are too slow to help. Panic ensues. Migrants mass in southern Europe, which is still struggling to pull itself out of a coronavirus-induced depression. Somewhere, a state defaults on debt held largely by Western financial institutions. In the chaos, an autocrat eyes an opportunity for a land grab. A United States already unwilling to take the lead leaves China to step into the void.

This is just one (invented) scenario of a number that are raising concerns in Western capitals and that were laid out to me in conversations with more than half a dozen leading security experts, academics, and government advisers in recent weeks. Of those I spoke with, few doubted that a second wave was coming. The real concern was where it would land.  Read more >>
Posted by Anthony Derek Catalano at 4:09 AM