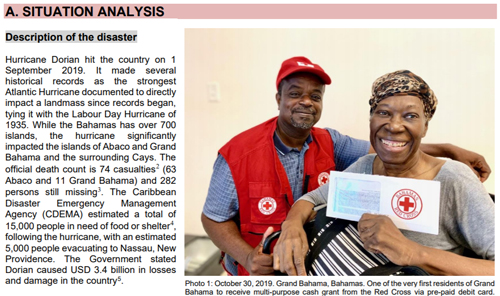 Hurricane Dorian hit the country on 1 September 2019. It made several historical records as the strongest Atlantic Hurricane documented to directly impact a landmass since records began, tying it with the Labour Day Hurricane of 1935. While the Bahamas has over 700 islands, the hurricane significantly impacted the islands of Abaco and Grand Bahama and the surrounding Cays. The official death count is 74 casualties (63 Abaco and 11 Grand Bahama) and 282 persons still missing. The Caribbean Disaster Emergency Management Agency (CDEMA) estimated a total of 15,000 people in need of food or shelter, following the hurricane, with an estimated 5,000 people evacuating to Nassau, New Providence. The Government stated Dorian caused USD 3.4 billion in losses and damage in the country.  Read report >>
Posted by Anthony Derek Catalano at 5:59 AM